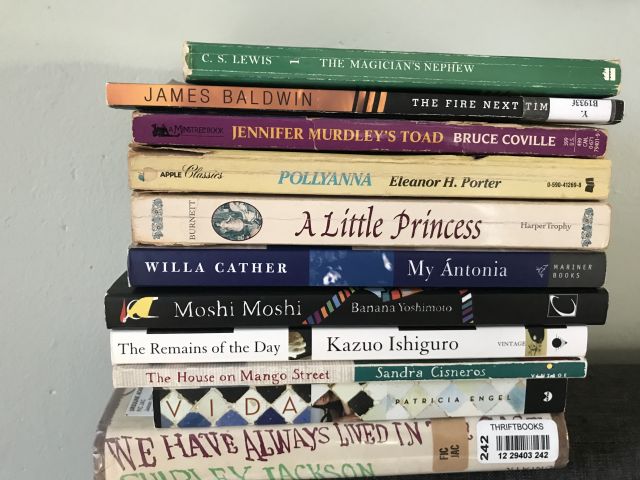 1. One part magic (The Magician’s Nephew)
2. One part soul (James Baldwin, preferably Giovanni’s Room)
3. One part girl who turns into a toad and never turns back (Coville)
4. Sights set on perpetual optimism (Pollyanna)
5. …yet falling short (My Antonia)
6. Smoke in mirrors/talking to ghosts/etc. (Moshi Moshi)
7. Inner voice (The House on Mango Street)
8. On super sad true love stories (Vida)
9. spooks (We Have Always Lived in the Castle)

I’m trying to hold myself accountable to my letter-writing project, which includes me writing a letter to Ethan every day. Some days are easier than others. But, I thought I’d share one every once in a while so that you get a sense for what’s going on, either in the present or the past, as I navigate motherhood. Enjoy!

This letter is a tough one. It may also be a long one. I’m having trouble starting. I took some notes from an art book, outlined the notes in yellow, listened to a bird chirp, wrapped a teal blanket on my knees, and picked out a pink pen. Then you called for me and we talked about nightmares in closets, and we’re back to now, only an hour and a half has passed.

I’m working myself up because I had planned to use this letter to tell you my origin story. Where to begin—

Going back in history, my grandfather was said to reside in a small, noble village called Villa del Carbon with his brother and parents. His father was called off to fight in the revolution, came back, and stole a bunch of gold from the bank, took his brother, and never saw his other son (my grandfather!) or wife again. Eventually, my grandfather moved to Mexico City and met my grandmother Antonia. They both raised eight children together. My grandfather did handyman jobs and my grandmother did laundry, which is a polite way to say they were both alcoholics who were never able to hold down jobs. Later in life, my grandmother found God and never drank again.

My grandfather died young—I’ve never quite understood why—I’m assuming it had to do with the complications related to alcoholism. He died in their home in San Francisco, Mexico, which my grandmother loved with all her heart. My grandmother was a widow for over 50 years. This was one of my mother’s greatest sadnesses. She atoned for this more than anything else. The other thing I should mention is that my mom and her siblings built the house in Mexico City with their own hands. It was a bitter squall when my oldest aunt became the heir to that estate. My grandfather’s brother? A millionaire. It gave the Jimenez’s a sense of the accursed, and of the parallel life they could have led if we were from a patriarchal lineage rather than a matriarchal one.

My dad’s story doesn’t have as clear origins, as I’m sure he doesn’t know, but he grew up in Bustamante, Monterrey, a beautiful stretch of the countryside until the age of five. His father was a sheepherder and mother was a homemaker, who also knew how to weave palms into baskets. My grandfather left my dad and seven siblings to travel to America. He worked for the City of Dallas sanitation department till he retired. My father’s mother was, strangely enough, born in Oklahoma. Some say her father was a Native American, but she was raised in Mexico. (Aside: for a spell, my mother’s father worked in the Chicago railway). My dad’s mother has a letter from President Truman granting nationalization, because my grandfather may have been a bracero during WWII.

When my dad was nationalized, he wore a powder blue suit and was asked to recite the number of stars on the flag. He went to East Dallas schools, got hit by a car more than once, and wanted nothing more than to be a musician. Your grandfather Noe is an artist at heart. When his dad died, my father had never really known him. He was only 22 and without a father. He is the best father I could have ever wished for. He has experienced so much loss and he faces it with grit and kindness and nobility.

My parents met when they were sixteen and seventeen and attended the same Latino church in downtown Dallas. They dated and eventually married. My two oldest sisters lived in an apartment in Dallas, and I was the first child born in Dallas and taken home to a home built of clapboard in McKinney, Texas. I’m minimizing this space—it was the only home I’ve never known.

And that, Ethan, is where my story begins.