My self-portrait for today is really just an Easter tiding. 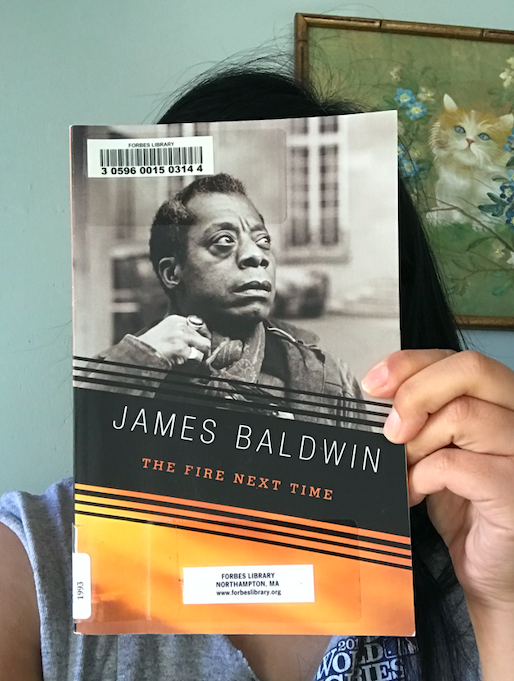 If we–now I mean the relatively conscious whites and the relatively conscious blacks, who must, like lovers, insist on, or create, the consciousness of the others–do not falter in our duty now, we may be able, handful that we are, to end the racial nightmare and achieve our country, and change the history of the world. if we do not now dare everything, the fulfillment of that prophecy, re-created from the Bible in song by a slave, is upon us: “God gave Noah the rainbow sign, No more water, the fire next time!”

And my letter to Ethan is below. For those of you new to my tiny letter project, I’m writing a letter to Ethan every day this year. I’ll share them every once in a while to hold myself accountable. Don’t feel obligated to read them–in fact, almost no one does except my sweet husband and brother. But if you’re feeling it, enjoy!

Today, I was considering writing to you about religion. It’s not something I like to talk about, but I’m assuming one day or another you’ll have some questions. I don’t have answers, but I do have my story.

My parents were both raised Roman Catholic. My dad even wanted to become a priest. Since they were both born in Mexico, I had a hard time separating this truth from the reality that the religion we were adhered to was borne of conquest. A conquest that took much from indigenous natives—especially women—and left them riddled with disease, heartbreak, rigidity—and to many, the farce of a pathway towards a purposeful life. This is putting it lightly.

I was interested in religion from an early age so I could go to Sunday school with my sisters. I hated watching them leave me behind. I was a pretty bright kid. I learned to read and write early. So, I got special permission to attend Catechism classes two years early, and bam! There I was. It is easy to mistake my prodigal learning abilities with unadulterated faith. It simply isn’t true.

Though, it was a good feeling. I learned quite a bit. I hold quiet spaces sacred, and this small Catholic church in McKinney, Texas—St. Michael’s—had a priest whom I admired and was very pious. He was quiet, poor, and stern with his wayward flock—if any sleeping was to be had during the gospel, he’d make us all stand up for the culminating torturous minutes, as we wiped fatigue from our eyes.

Confession truly released my burdens. I cherished the contrast between the dark velvets of the church, the candles, the stained glass, with the jubilant sunshine outdoors. The most honest thing I can say to you is that if you look, if you really look, you can find God anywhere you go.

I took my Catholic life very seriously. If I planned to throw my dirty socks on the floor—I’d ask myself—what would Jesus want me to do? And I’d go put them in the hamper. The most prevalent (and damaging) part of Catholicism in me is the policing of my thoughts. In this sense, he really is omnipresent.

Conversely, being raised Catholic gave me fortitude, faith, and allowed me to soak in the beauty and mystery of everyday life. This, in and of itself, was a gift.

Eventually, I grew up. I questioned why we went to church but my parents never did. I wondered why such a Latino religion had no Latinos at service. This would have given me a lot, actually—to see people like me in common spaces. My mother deliberately tried to surround us with white people, as if it would save us from inevitable doom. This was something I was blissfully unaware of until middle school, and then it was the only thing I could see. I’ve absorbed so many curious looks and glaring energy at this point I’ve become an expert at invisibility, at being kind and helpful, and especially—at making myself small. This process of folding inwards began for me at church.

At some point I had the lightning bolt moment when I realized the differences between a mass and a cult are not that different, it’s just a matter of perspective. The communal chanting, the lighting of the candles, drinking a dead man’s blood…because it’s familiar doesn’t lend it truth, or absolution, or permission towards self-righteousness. Life is much more nuanced and variable than that.

Many young Catholics struggle to come to terms with their sexuality because they’ve been so oppressed. In this sense, I’m no exception. I’ve always been against the immaterial nature of order, of right and wrong, and black and white rules to live by. This may be a helpful moral compass when you’re very young, but as you get older, and it’s time to make more difficult decisions, there is a curious void of empathy in this approach.

As mentioned in a prior letter—I had a female partner for several years. By many, she is vastly misunderstood. She gave me a sense of true companionship, unconditional love, and empathy that was borne of her struggles. I learned so much about self-love. When the female body is under scrutiny, and yet it’s reflected at you in the eyes of someone exceptional, it helped me process my selfhood in a way I wouldn’t have otherwise.

If she had been forced into a male partnership, she certainly would have ended her life. She felt her truth strongly. She suffered from it greatly, at the hands of her mother and her peers. At the heart of it all, she wanted nothing more than to be loved. To be accepted. Living through painful truths alongside her—the pain of never being accepted within a family, a church, in public—was heartbreaking. It is still heartbreaking.

When your father and I decided to get married, I couldn’t do it at the Catholic Church. I was filled with visceral revulsion at the idea. Literal bile in my throat. In the words of James Baldwin: “It is not too much to say that whoever wishes to become a truly moral human being (and let us not ask whether or not this is possible; I think we must believe it is possible) must first divorce himself from all the prohibitions, crimes, and hypocrisies of the Christian church. If the concept of God has any validity or any use, it can only be to make us larger, freer, and more loving. If God cannot do this, then it is time we got rid of Him.”

If all of us are not free, then none of us are free. Your father and I got married before gay marriage was legal. I felt the dashed dreams of those around me so acutely, that I chose, with steadfast deliberation, not to make a home of a place that did not welcome those I loved, such as your dad and my past female partner.

Never once have I regretted this decision. In fact, if I lived a hundred other lives I would make the same choice over and over again. These days, it is easier for me to stand by what is right than what I am most afraid of.

Yet, sometimes I miss the smoke and grainy taste of the body of Christ in the form of a cookie. I miss the certainty that I would not travel the world lost—but I also feel strongly that many I know who a part of the church have not been tested in ways that exclude them. Their membership depends on the exclusion of others. I choose my earthbound loves, for better or for worst.

I don’t envy my church-going peers. That is to say—I will help guide you. I will help you find your truths, even if they are not binary. If you ever love someone who is othered, I will love them with all my heart because they love you. If you make a mistake—either big or small—I will still love you. We are all human. We are all fallible.