Happy Saturday! I don’t have much of a preamble for today, but here’s a picture of two dudes at The Ledges in Shelburne, MA… 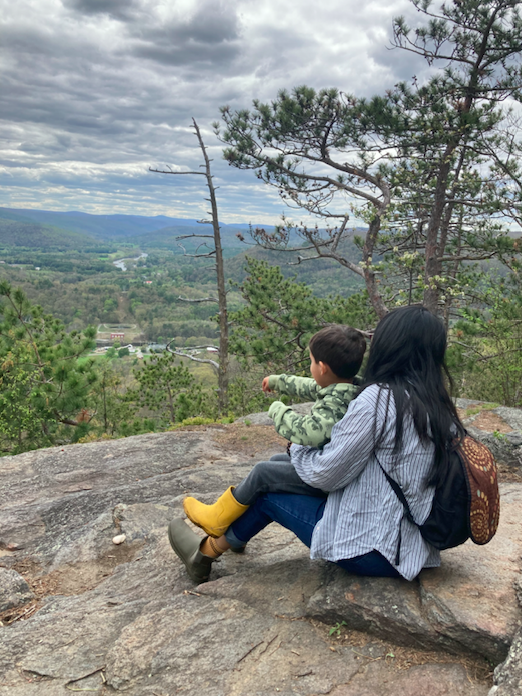 Last night I awoke from a dream, one of my reoccurring ones—I’m in a dorm room crowded with dark furniture, out of place, lost—but then, the twist: I open the hall door and see the profile of an old friend, Zac. He didn’t look like himself any longer—his profile much changed—his hair weirdly triangular. He races down the steps to get away and I follow. He turns only once to look back at me, and before my eyes, he becomes young again. His disguise disappears, and he was as I remember him. He asked me why I never wrote back. Why I didn’t try harder. How he was disappointed—not in what happened, but in me.

With that, I woke up and looked down at my son sleeping peacefully, only completely upside down. I stepped quietly into the living room and grabbed the first book of a stack I had set aside for late-night distractions.

Before I tell you about the book, I should tell you that I don’t like writing. It exhausts me. It pushes me to remember, relive, unearth. Once, in high school, my friend Clarissa said my yearbook superlative should be “most likely to stay exactly the same.” I was surprised by the remark, yet I had never seen myself from the outside as she had. She shrugged casually and said, “As long as I’ve known you, you’ve never changed.”

It stayed with me because maybe she was right. There is something immoveable, stubborn, persistent, exacting, and partially hidden about me that has never budged for anyone. The other thing she could have meant was that I would always love books first. I think that’s how we met—both of our moms would drop us off at middle school so early the buses hadn’t even arrived yet, and we were both nosed in a book and eventually found each other. Once I fall into the dream of a story, all is lost—the world around me, my anxieties, even my hopes, and my future. Reading is a form of radical empathy, one of the most genuine emotions that I feel and have developed a constancy for. I become the story until it becomes my own.

There are books that I’ve read many of—Sandra Cisneros, Karen Russell, David Foster Wallace, Donna Tartt, Elizabeth Strout, Ruth Reichl, Yiyun Li, Willa Cather, and James Baldwin. But, confidently, greedily, in their entirety: the translated collections of Yoko Ogawa, Banana Yoshimoto, Haruki Murakami, and Kazuo Ishiguro. Sometimes I wonder—why the hell do I see myself in contemporary Japan more than I do as a Chicana, Tejana, Mexicana?

My friend Paul, a bookseller in Maine, was recently writing me a comforting letter. He said I must not confuse aloneness with loneliness. That’s it’s the capacity to walk through life alone and grab at a thread and let it lead you towards the light. I think it’s this great aloneness that I seek to understand.

In this case, the works where I’m most seen have vestiges of the West and are written by younger Japanese authors. The characters are vague, abstract, shimmery at the edges. They watch TV as the rain falls artfully; they eat plates of spaghetti and fold their clothes nicely. A tendency many of them have are to live in their heads which are living in the past.

The book I picked up last night was Klara and the Sun. It’s the story of a young girl, Josie, who is ill due to circumstances of her being “lifted”—her DNA altered so that she can stay competitive, relevant, and intelligent in modern society. She adopts a life-size Artificial Friend, Klara, who is sharp and intuitive, and hellbent on saving Josie’s life.

The story is tender, crisp—the setting vaguely European, though British at heart. Josie is tucked away in a dreamy wilderness while the rest of the world is fast-paced, violent, and as aimless as today. Klara worships the sun, as it powers her movements. She makes a deal with the sun to save Josie—she meditates with it, asks it for help, much like a God.

Mostly, Klara serves to remind us that life is deeply difficult and mysterious. She ends up alone in a consignment warehouse as she becomes less and less relevant, unable to move yet steeping in her memories like tea.

I’m reminded of my own love for artifice—a worn fence, a chipped plate, a sentimental sweatshirt. And I’m also reminded of something more intangible—the love we carry inside forever. The look on my friend’s face in the dream, my incapacity for change—they are all furniture in the rooms of my heart made up like a house, the lights always burning.