I’m back to reading! To my horror, I’ve been resonating with nonfiction lately (very uncharacteristic of me). I’m in the middle of Garlic and Sapphires by Ruth Reichl, who is one of my guilty pleasures. She writes about food so well it’s almost as good as eating it.

And today, I made this tiny bouquet: 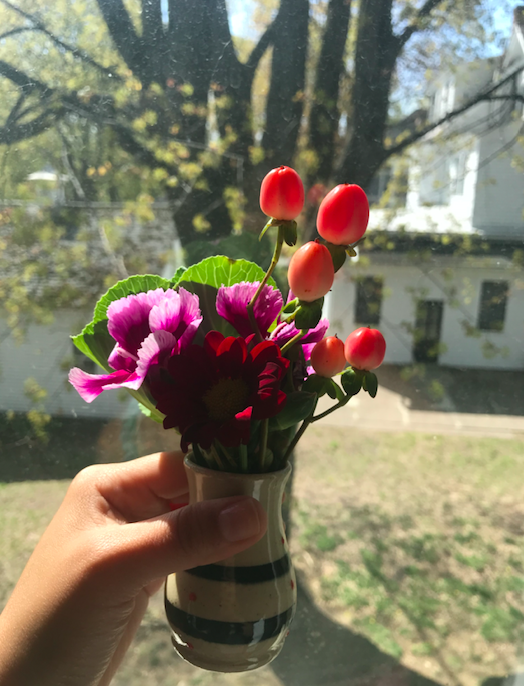 I also read Shadow of the Wind for the second time—I noticed so much more this time around that I missed on the first read. It was like revisiting an old friend and seeing how they’ve changed. Kind of like this letter–I’m visiting a version of myself that no longer exists.

This letter is filled with summer nostalgia, a specific one, actually—the summer of 2007. I had to stretch to remember, but I hope you enjoy the offering.

In a prior letter, I spoke about what it was like to work there as a woman and as a mom. I never chose the perspective of the person who was both curious and passionate about the romance of the final frontier.

In my first internship at NASA, I was nineteen.

Despite the utter terror of my parents, I boarded a plane to San Jose, CA with one suitcase and an arbitrary idea of what to do when I got there. I hailed a cab all the way to Mountain View, where I was being offered military housing for $200 a week.

Back then, folks only got random security clearances, so I walked right past the gate without anyone noticing. When I got my key from an unmarked building, I made my way over to my unit. The housing was more like summer camp—I shared a one-room barrack with my roommate, Laura. Google interns lived onsite too. We made pasta in the coffee pot whenever we were feeling fancy.

It was fun in the sense that we had these big windows, and people would knock on our windows to wake us up in the morning. Down below was a deck where the interns liked to work from their laptops and catch some sun. We had a beautiful mountain with two ridges in our vista and the sky was always radiantly blue.

A guy named Cosmo was down at the deck a lot, and he liked to pick my brain about my contracted worksite, which was called the Search for Extraterrestrial Intelligence Institute (SETI). I never had much to say, and I think we all made our jobs sound more mysterious than they were on purpose.

As far as I know, only one of us was sworn to secrecy, and it was more about a patent than anything else. The youngest among us was probably about thirteen, though we didn’t know it till someone tried to give her a beer at a softball game (so I heard, as I wouldn’t be caught dead playing softball).

I loved living at Ames Research Center. It gave a whole new meaning to living at work. I liked walking the outer rim of campus to the fancier military housing—where there was a bookstore and every house had a palm tree in the front yard. There was also a commissary, where others were allowed to shop if they were veterans. I liked walking the length of the wind tunnel and rolling a penny down its expansive length.

One of my good friends was Sasha, a brilliant Russian mathematician. He liked to tell me stories about his ex-girlfriend, whom he used to tutor when she was in high school. Things didn’t work out between them, but he spoke of her articulate brilliance through writing. The way he described her writing was an experience in itself—I got goosebumps listening to it. I thought he may be exaggerating. We would be better friends now—he really loved to laugh, and I took myself too seriously back then.

I have this faint memory of the butcher at the commissary asking me if I wanted to visit an overlook with him one night. I remember he had a pretty noticeable stutter, and it pained him to ask. I’ve always had a soft spot for sudden kindness, and we drove in silence.

He showed me the most stunning view of San Francisco I’ve ever seen. It’s not the one of my memory, but the one in my heart. I never went back to the commissary, but I have fond memories of the view he chose to share with a stranger.

At SETI, we had a chocolate fountain once a week, something so astonishing that I’ve longed for it the rest of my life. Some may think I was drinking coffee, but it was really a mug full of chocolate. I also loved having a door read my fingerprint—I felt so important! I could see Google headquarters from SETI, which I got to by trekking beneath the 101.

A small number of us were in a lab called Europa, and I made good friends with the IT guy. He noticed that I was sensitive and took myself very seriously. “Don’t take anyone seriously unless they’re thirty,” he said. “Trust me.”

My team was unforgettable. My boss was kind. I have no idea where I saw her in a silvery dress with matching gloves up to her elbows and frosty pink lipstick, but it’s always the first image that comes to mind when I think of her. Most of the time, she wore turtlenecks and old Brown sweaters, and sensible jeans. She knew Sally Ride, and her mother had been one of the first female food scientists in the US. I adored her.

Back then, anytime I met a nonintimidating white woman, I compared them to my Aunt Kate—who had bobbed hair and a clean look about her—white socks, neat tennis shoes. Honestly, I also compared Aunt Kate to my favorite children’s book author, whose book jacket pictured her with two golden retrievers. Anyhow, the three of them really did look alike, or carried themselves in a way that I didn’t know yet to interpret as very New England.

One of my other team members was a girl who was so pretty you almost didn’t notice. She has purple-y eyes like Elizabeth Taylor. I actually didn’t pick up on the dead gorgeous because she was a snobby, yet talented, programmer, but eventually, she lightened up. She was also an evangelical Christian and a vegetarian, very much so of both, and I think she had the impression that I hadn’t worked as hard as she had to get a seat at the table.

In this case, she was probably right. I “won” the internship through a contest that involved writing a personal essay about space. I think I wrote about the moon. There was no science in the piece, and it was probably really about my mother.

We also had a team member from Australia and another from Italy, who saw himself as a recovering love addict, though he was currently dating his therapist.

We worked well together. We genuinely liked spending time with one another, and everyone was hyperintelligent. Well, except for me, but I was still discovering my talents, they reassured me.

Mostly, what I did was weigh small quantities of dirt from across the world and then measure them on a spectrometer. I’m talking quantities so small if I breathed on them I would blow them away. The kind you pick up with a toothpick or a tweezer and hope for the best. My JPL colleague was also taking measurements of soil but from a Martian rover. The upload speeds were agonizingly slow.

We were trying to map the Martian soil by comparing it to dirt on earth, so a lot of mixing and testing was involved. I didn’t mind my job—the dirt sampler—though I rarely knew what I was seeing. It was important that many of the minerals were ferrous/ferrites, because were backing into telling a hydrological history of Mars, and water means life. People’s eyes usually start glazing when I get to this point, so I’ll stop there. **

Another fractured memory—a party at my boss’s house, where Andrey brought kangaroo steaks, and Elizabeth Taylor and I admired the almond tree in the front yard. A whole bedroom in my boss’s house was dedicated to two cats. I churned blackberry ice cream and made sure the cats didn’t scratch any babies.**

Once, the IT guy snuck me into a lab where you can put on a big pair of headphones and listen to the universe. I don’t remember much more than that, other than the look on his face, dreamy and far away, as we listened to static for an hour.

In late July, my friend Steve and I went to Santa Cruz and got really sunburnt. The Google interns were always giving us food and concert tickets because they never wanted to go home, so we had a good summer using their vouchers and being mysterious about our work at NASA.

We got invited into Google headquarters once to pick up vouchers and were offered Naked Juice and a grilled cheese sandwich made to order by a chef. We were so tickled by the whole thing we took some juice home.

Our favorite adventure together was going to a nearby observatory at an important point in celestial time and watching a galaxy form and destruct in a matter of seconds through a powerful telescope. We’ll always share that moment between us—the shiny floor, patterned with black triangles, the beam of a laser telling me where to look, and the stunning feeling of our mutual insignificance.

Early August, I went to Half Moon Bay with my roommate while she went surfing. I sat on the beach and read a book as I ate a turkey sandwich.

I overheard a conversation by a surfer in a red shirt talking about a cyclist he had seen riding by his dorm in Texas, massaging a bleached handlebar mustache. The observation stuck. I glanced at the speaker, who looked back at me calmly for a few seconds before leaping into the waves. I didn’t say a word, but I also didn’t forget it.

I went back to my Texas college and was considering a Fulbright. My mentor gave me an essay that a winner had written. She’s not from around here, but it’s the type of writing to give you goosebumps, he said. Of course, it was written by my friend Sasha’s girlfriend. I knew this before he even gave me the printout.

Of course, on my last day of work at SETI, I realized one of the girls in Europa lived two minutes away from me in my hometown.

Of course, when I go back to my college campus after that memorable summer, the first thing I saw was a guy riding by with a bleached blonde handlebar mustache, and the revelatory look of recognition from a guy across the street in a red shirt. He offered me his umbrella, and we talked about everything we saw and what we saw in each other on a long walk to nowhere.

I carried that experience with me for a long time. I still do. It was probably a coming of age story, in the sense that my eyes opened to what is possible. Time has a way of expanding and contracting during the many seasons of your life, and the world is both much bigger and smaller than you may think.